Exactly how do we tattoo wearing folk smell like? Well, I don't think we smell different from any other person, it's not like we're dripping with ink or we smell contantly of needles and sterile equipment. I'm kidding, of course! We smell just awesome.


Tattoos have long been synonymous with music, art, culture, confidence, rebellion, identity, meaning, history, symbolism and attitude. All the elements in creating a great brand and a great product.

As the rest of the world catches up to be as daring and hip as we are fashion brands have cashed in on tattoo culture big time over the past decade.
Tattoo culture lends itself to fashion so easily that brands have jumped onto the bandwagon to have themselves appeal to the young, trendy and independent minded.


At first, Tattoo designed and tattoo inspired clothing started to be seen everywhere, along with accessories and jewelry, and then shoes, and in came the fragrances. Even Harry Winston designed tattoo inspired diamond and ruby brooches! Seriously, what does the mega rich, high society Harry Winston crowd have to do with the tattoo crowd?


In the beginning, I kinda scoffed at the idea that it was just big companies trying to cash in on a culture they know little about. Admittedly, I always assumed their interests were purely shallow and financial. All they did was find out who was prominent in the tattoo scene and asked them to collaborate. But after awhile, I started to feel good about the whole thing. It was a BIG STEP that tattoos were being portrayed in the mainstream and it was evident that the old negative stigmas about tattooed people were being eroded.  To that I say: Fashion Away! 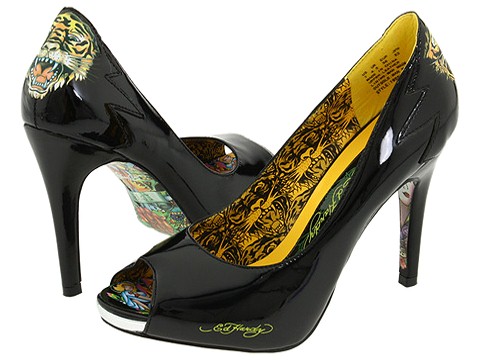 Later on,  tattoo artists started creating their own clothing lines and, why not? It's all about spreading the culture we love. Most tattoo shops already print their own t shirts, stickers and poster prints. Wearing Tattoo inspired clothing could be a way for people to decide on getting one for real. Some people just can''t jump into that kind of a lifelong decision, you know? (Though, I can't understand what the big deal is). Fashion is such a part of modern life that if tattoo culture can permeate the mainstream. So be it! Artists are the leaders of tomorrow, culturally anyway.