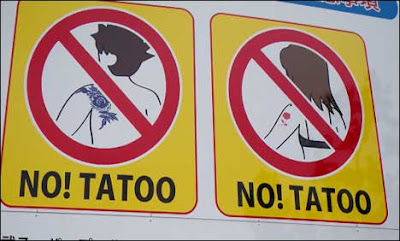 The mayor of Osaka, Japan, Toru Hashimoto has waged "war" on bureaucrats that wore tattoos. The ex lawyer/ Tv personality has implemented a mandatory survey that demanded that all public employees, including teachers "confess" if they were tattooed. From a compulsory survey of more than 32000 workers, 113 bureaucrats and 10 of 17000 teachers admitted to having tattoos. The Osaka survey asked employees to disclose both visible and concealed tattoos. They were also required to detail what the subject matter was and how long they had had them.

This crackdown was initiated because a welfare officer "made co-workers very uncomfortable" by showing up to work regularly in a T-shirt, which revealed a shoulder tattoo. The city, in reaction to the mayors survey is now considering relegating the tattooed bureaucrats away from positions that require daily interaction with members of the public to a “behind-the-scenes” role. There are also talks about making the ink slingers either remove the tattoos or find new jobs in the private sector.

"Some workplaces may tolerate tattoos, but that shouldn't be the case for public servants," Hashimoto said, when the results of the survey were released. "If they insist on having tattoos, they had better leave the city office and go and work in the private sector." “[The teachers]  plan to remove the tattoos, so they don’t embarrass themselves further in front of their students,” Hashimoto said. “I hope they can refocus on teaching.” Hashimoto, a rightwing populist, has also introduced regulations earlier this year that required teachers to sing the national anthem during school ceremonies.
Osaka's public servants are not happy with Hashimoto's new tattoo policy. About 800 teachers and other school workers refused to respond to his survey, saying it infringed on their right to privacy. A local lawyers' group had asked the city to cancel the investigation, calling it a violation of human rights.
This draconian "Tattoo witch-hunt" comes at a strange time in history given that Matajiro Koizumi, the grandfather of the former prime minister, Junichiro Koizumi, served as the 'posts and telecommunications minister' despite a large tattoo of a red dragon on his back. It looks like Hashimoto may have something personal against the inked. Weekly tabloids claimed that his deceased father and uncle were both members of the Yakuza, although it is not known whether they had tattoos.
In Japan, large, elaborate body suit tattoos have traditionally been associated with yakuza, or some form of underworld memberhip. Body art is largely banned from swimming pools, gyms, public onsens (hot springs) and some major companies will not employ the inked. Certain places that are more accepting ask people to cover up their ink while in a professional environment to avoid any speculation of gang affiliation. Here at Lion City Tattoo, we've experienced first hand in Japan that people on the streets of Tokyo have politely asked for us to cover up visible sleeve tatts with long sleeved clothing as it might offend members of the public.

Our guess is that one would not be able to fully understand this very blatant culture of  discrimination in the Japan unless we were born and raised in that environment.  However, for a mayor to implement mandatory surveys that invade the personal privacy of the city's workers does not seem at all fitting in an increasingly globalized world.
It is not uncommon for tattoos to be a point of concern, even in supposedly "modernised" countries, when it comes to employment or even when it comes to getting visas or emigration. It's been said that "The difference between tattooed and non tattooed people is that tattooed people don't care if you're tattooed or not."
Although all of us here at Lion City Tatoo see tattoos as a vibrant, beautiful, progressive artform. There are many in society that beg to differ. As much as we want to express ourselves and have our own identities, we have to be ready to be judged for what we believe in and what we stand up for. That's been the way of the past and that's probably the way it will always be. Humans are a peculiar, judgemental bunch, so... be responsible for your own path in life, you might want to "Think before you Ink".

No Tattoo signs seen in Japan 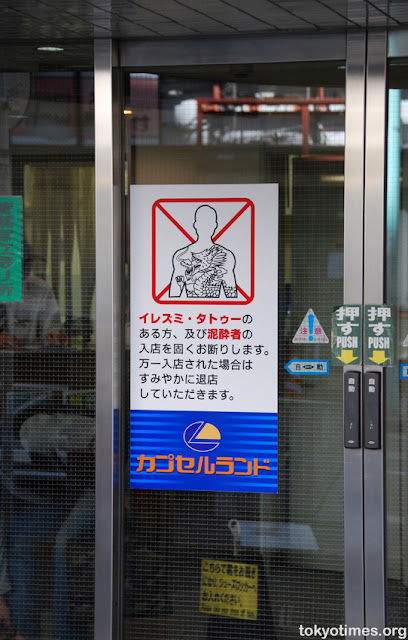 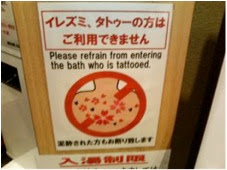 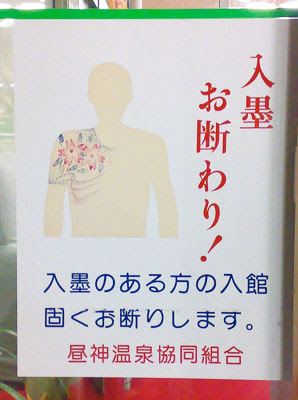 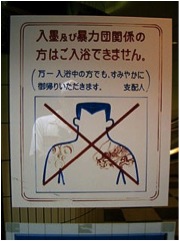 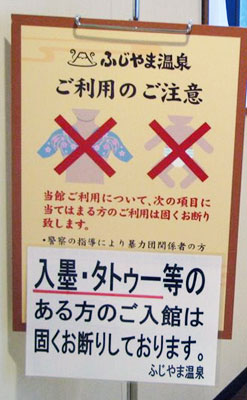